Whenever the subject of the deficit comes up, many well-intentioned people make the suggestion that we should repeal all or some of the Bush tax cuts and that this will go a long way to at least beginning to fix the problem.

Often times this graph (or one like it) is used in support of this notion. 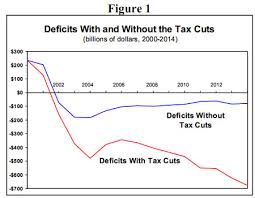 First, let’s keep in mind that this is the deficit, the annual shortage when one compares money spent to money collected. This is different from the national debt which measures the sum total of the deficits.

On its face, it would seem that raising taxes (or eliminating the Bush tax cuts as some prefer to say) would be a reasonable approach. The problem is that the blue line above assumes that all taxpayers would leave their behavior unchanged. This is demonstrably false through what I have come to find out is called Hauser’s Law.

What this graph clearly shows is that raising taxes actually has little to no effect on money collected as compared to GDP. Why? Because taxpayers do change their behavior. The wealthy will shift money using tax sheltering or even move it out of the country. 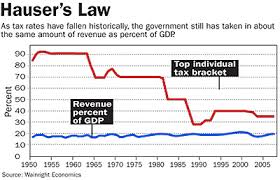 What is worse is that which is unseen – The slowdown of the economy that would result from this activity. So what is to be done?

There is only one viable answer – reduce the size of government.

One thought on “On Hauser’s Law and Soaking the Rich”