Note to readers: While running for Texas State Senate, I kept my political posts in this space to a minimum, but now that the election is over, I find it difficult to continue to separate the political stuff. So, if you don’t like the political stuff, please just ignore it. Most of my post will still be business related.

Yesterday, it was announced that the Congress has authorized an end to the “Do Ask, Don’t Tell” policy which will enable openly homosexual men and women to serve in the United States military. I applaud this decision and believe it will ultimately lead to a stronger more vital force.

I have long believed that anyone who wants to serve in this capacity should have the right to do so. My thanks to anyone who has served in the past! Here, here!

That said, accompanying the story was this photo of President Barack Obama:

The image of the President seems to be a common occurrence, and goes all the way back to some of his campaign shots in which the circle representing the halo was the logo from his campaign.

What is even more troubling to me is that Obama is not alone in being portrayed in this fashion. It seems this was trend for George Bush as well although the number of different images is considerably less. What is more, you cannot find this type of image for Clinton, Bush 39, or Reagan. (I did not go back any further.) 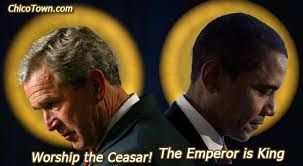 I do not think it is helpful for us to see images as sanctifying our leaders. Our Presidents, on both sides of the aisle, are humans with humans flaws and failings. They are not capable of miracles, nor, quite frankly, should we want or expect them to be.

Two years ago, I laid down this challenge to my left-leaning friends – What, specifically, to you expect of President Obama and the Democrats in control of Congress over the next two years such that if these things are not accomplished you will consider it a failure?

I received the following answers (with my assessments):

Today, I make this same challenge to my right-leaning friends – What, specifically, to you expect of the Republicans in control of the House over the next two years such that if these things are not accomplished you will consider it a failure?

For those of you in Texas, I will add – What, specifically, to you expect of the Republicans in control of the entire state government by an overwhelming margin to do over the next two years, such that, if these things are not accomplished you will consider it a failure?

Funny, but not really.

My uncle sent this to me today and I thought it would be appropriate to post on my blog as election day in the United States is tomorrow.

I have sourced the original with the exception of the last sentence swifttallon to eBaum’s world.

One day a florist went to a barber for a haircut. After the cut, he asked about his bill, and the barber replied, ‘I cannot accept money from you , I’m doing community service this week.’ The florist  was pleased and left the shop. When the barber went to open his shop the next morning, there was a ‘thank you’ card and a dozen roses waiting for him at his door.

Later, a cop comes in for a haircut, and when he tries to pay his bill, the barber again replied, ‘I cannot accept money from you , I’m doing community service this week.’ The cop was happy and left the shop. The next morning when the barber went to open up, there was a ‘thank you’ card and a dozen donuts waiting for him at his door.

Then a Congressman came in for a haircut, and when he went to pay his bill, the barber again replied, ‘I can not accept money from you. I’m doing community service this week.’ The Congressman was very happy and left the shop. The next morning, when the barber went to open up, there were a dozen Congressmen lined up waiting for a free haircut.

And that, my friends, illustrates the fundamental difference between the citizens of our country and the politicians who run it.