Those of you who follow this blog regularly will no doubt recall that I am an ardent adherent of Peter Block and his works. If you are also, I have some terrific news.

Peter has recently published a new (third) edition of his seminal work Flawless Consulting. I am thrilled to add it to my bookshelf next to the first and second editions. They are both terrific!

I am looking forward to reading and comparing this new edition to the first. It is fascinating to see how his thinking has evolved over the past three decades.

In addition, Peter has posted a video explaining the term – flawless consulting.

Earlier this week, I had the opportunity to work with a Sage partner, Bill Delgado of Keystone Software Solutions, on creating a job placement ad for a position he has been trying to fill for several months.

It is a long story, but the gist of it is that it is really hard to find someone with a very specific skill set in the software implementation industry unless you either: a) hire someone from a competitor, or b) someone from another geographic area decides to move to your location, you have to be willing to groom your own new talent.

After a few failed attempts, however, to find the specific talent, Bill has decided to begin the search anew.

I suggested that they might want to rethink the ad they had been placing. I dug up an article I remember reading from Peter Block on how Ernest Shackleton advertised for people to join him on his failed excursion to the South Pole.

In the article Block suggests the following ad:

Join our organization and become part of a place where:

Here is the ad Bill is running this week.

Join Keystone Software Solutions and become part of a place where:

I am curious as to what the response will be. What are your thoughts on this type of ad?

Update: Link to the actual ad on craigslist.org.

For a long time I have been an admirer of Peter Block. His works Flawless Consulting, The Answer to How is Yes! and Community have long been on my recommended reading list.

Especially intriguing to me have been the six transformations of questions that he posits in The Answer to How… Here they are as he sees them: 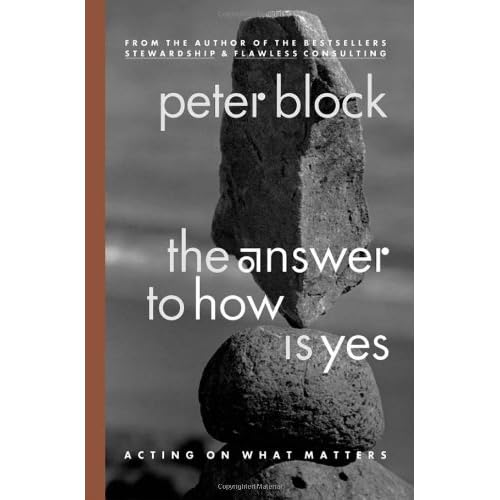 Block’s general thesis is that while the How-based questions are important and need to be answered, the problem is that when they are asked and answered too early in the consulting process they tend to be a defensive  mechanism against change and, therefore, they stifle creativity and innovation. According to Peter Block a great consultant is one who is able to shift the dialogue to the What-based questions first and later return, if needed, to the How-based.

With all of this, I agree. However, after having spent about seven years teaching these as is, I am ready (and perhaps bold enough) to recommend a couple of changes to the What-based questions.

First, in place of “What is the price I am willing to pay?” I suggest the following: “What is the value of it to me?” After much thought, I believe this is the better question because it focuses on the primary idea of perceived value. As we know price is derived from perceived value, so looking at price is incorrect because it presupposes value.

Second, in place of “What is the crossroads at which I find myself?” I suggest, “What is the judgment I need to make?” Unlike the first, I believe I am still completely in alignment with Block on this idea and my change is more in semantics. However, I like this question better because a) it is easier to understand and b) it is in alignment with my mantra much written about on this blog that all measurements are judgments in disguise.

If you find this post confusing, might I suggest that you read The Answer to How… It is truly one of the best books on the subject of consulting ever written.

I was honored to speak at the ITA Fall 2009 Collaborative in Rancho Mirage on the topic of monitoring an controlling project in software implementation engagements.

During the presentation I did a brief workshop on dealing with resistance. The video clip is part of the introduction to that topic. My thanks to Wendy Gorrie of Plus Computer Solutions for agreeing to serve as my videographer for the session, she captured way more that I had hoped. (I hope the blood returned to your arm, Wendy.)

I am deeply indebted to Peter Block who developed this idea extensively in his book Flawless Consulting.

If you are interested to view the entire segment, please send me an email at ed.kless *at* choosegreat.com.

I’m not a river or a giant bird
That soars to the sea,
And if I’m never tied to anything,
I’ll never be free

-From the Finale of the musical Pippin by Stephen Schwartz

Twenty years ago, I had the good fortune to perform in this play as the eponymous character with a community theatre troupe. The run was four performances over two weekends. So, if you throw in rehearsals, I must have sang these lyrics dozens, perhaps hundreds of times.

It was not until at least ten years later, when I first began reading the works of Peter Block, that I even began to understand them. What Schwartz has so elegantly defined for us is the idea of accountability.

Over the past few years I have read countless books, articles and blog posts that call for more accountability in the workplace. With the exception of Block, they all suppose that it is a management function to develop processes to “hold people accountable.” Think back on your past conversations about accountability and, no doubt, they will be transitive in nature. Herein lies the problem.

Accountability is not something can be imposed, but rather chosen. Peter Block begins to develop this idea as far back as Flawless Consulting and it comes to full maturity in Freedom and Accountability at Work. It is absurd to think we can even try to “get those people to be accountable.”

In Viktor Frankl’s Man’s Search for Meaning, the author writes of his experiences surviving a Nazi concentration camp and comes to the understanding that the only human freedom that cannot ever be taken away is the ability to choose how one feels about any given situation. Even if we are a victim of unspeakable crimes, we have the choice as to whether or not we feel like a victim. We are accountable for our own feelings, not anyone else.

Indeed, it is not only totalitarianism that is the enemy of freedom, but vagueness. In my view this is the problem with accountability in business. It is not that people do not want to be accountable, but rather that leaders are unclear about the expectations. Ron Baker tells a story of proposing this gedanken to a group to which he was speaking – What if timesheets became illegal? One participant blurted out, “Oh, my God, we would actually have to lead.”

The startling conclusion at which I have arrived through reflect on Block and Schwartz is this: Freedom and accountability are not just linked but are actually one and the same. If you want people to “be accountable” give them their freedom, but be clear about the expected results.